Building Bridges With The Ambassador Wolf

Posted by A Guest Post by Matthew Ellis of the Colorado Wolf and Wildlife Center | September 6, 2018 at 3:40 PM

The wolf is one of the most feared animals—and one of the most misunderstood. Most of us have heard the story of the big, bad wolf created by fairytales and Hollywood, but due to their cautious and shy nature, very few people get to see what they are really like.  An ambassador wolf allows gives us the chance to meet the real thing. 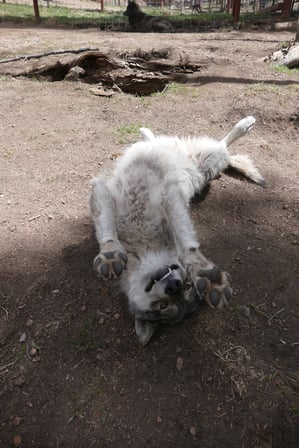 Meet Orenda. She's worked very hard everyday to earn the important role of ambassador wolf. Orenda is vital to changing the way the gray wolf is perceived. If you've been to an event with the Rocky Mountain Wolf Project, you might have met her yourself!

Ambassador wolf have the ability to do things that are usually only seen in domesticated animals. They are comfortable on a harness or leash, meeting large groups of people, and traveling away from their familiar site. As a result, people are given the opportunity to see what these amazing animals are truly like up close. Wolves inspire respect, admiration, and understanding from the individuals they meet in only a short period of time, and this is more important now than ever.

After the successful reintroduction of wild wolves, most notably in Yellowstone National Park, public education of the wolf is essential to ensuring their survival and future reintroduction in other places they historically called home. Learning to co-exist with wolves is the greatest challenge in restoring the species, and, since their listing on the Endangered Species Act is tenuous as of late, their lives are dependent on our understanding and compassion.

The ambassador wolf has the ability to tell the story of the real wolf. Those who encounter an ambassador wolf leave not only with a greater respect for wolves but for all wildlife. They learn the shy, curious and family-oriented nature of wolves, a big contrast to the massive man-eaters that we’ve read about in our bedtime stories. They also learn how to co-exist with wild animals in general. For example, learning the behavioral differences between domesticated dogs and wolves may help stop practices such as feeding wildlife, which is a serious problem when reintroducing animals near people who are not familiar with them. 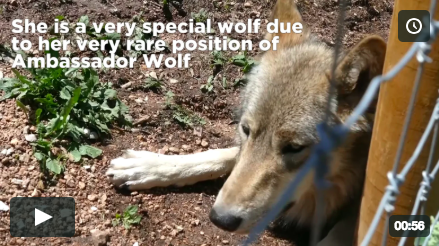 The myth of the big, bad wolf is one that has developed over centuries, long before European settlers came to the United States. It is why we were so universally determined to exterminate the wolf as Europeans moved across the country, treating them with almost pathological hostility. It is only since scientists began to study wolves up-close that we learned just how misguided our stories were. With ambassador wolves, we stand a better chance at tearing down these outdated and unfair misconceptions we still hold on to.