Why conservationists want to bring wolves back to Colorado.

Originally written and published in partnership with the team at UpWorthy.

When you think of the quintessential American species, what comes to mind? Buffalo? Bald eagles? What about ... the gray wolf?

It probably wasn't the first thing you thought of, but maybe it should be.

After all, the gray wolf was once common all across the country, frequently seen — or heard howling — by America’s earliest settlers everywhere.

But unlike the American buffalo or the bald eagle, the gray wolf got a really bad rap early on.

Instead of admiring or cherishing them, people were simply afraid of wolves. And when settlers moved out West, wolves there were especially hated by ranchers who didn't want them killing their cattle.

Unfortunately, this meant that for centuries, wolves were hunted and trapped for sport and to protect livestock.

By the end of the 19th century, ranchers, farmers, and settlers weren’t the only ones killing wolves: A government-sponsored extermination plan was launched, and by the 1950s, wolves were mostly wiped out from their historic ranges in the lower 48 states — including Colorado.

Wolves are still largely absent from Colorado today, but they don’t need to be.

Studies have shown that a great habitat and healthy prey populations — notably elk — are available for gray wolves throughout the western half of Colorado, including areas in the Flat Tops.

A view of the Flat Tops Wilderness area in Colorado. Image via USDA/Flickr.

For conservationists and wildlife management, it’s just a question of how to bring the wolves back.

One way to do this is to just help wolves migrate naturally from surrounding states. In Colorado’s neighboring states, wolf populations have been growing, according to Colorado Parks and Wildlife officials. Because these animals are known to travel long distances while hunting prey, they could come into Colorado on their own.

Gray wolves are currently protected by the Endangered Species Act in Colorado, so killing a wolf is against the law and can result in serious penalties — including criminal charges, a year in prison, and a fine of up to $10,000. This means that if a gray wolf crosses state lines into Colorado, it should be protected — though there has been a lot of pressure to weaken federal wildlife protection laws lately.

There have already been occasional one-off sightings of gray wolves in Colorado, and last year, state park officials issued a statement letting residents know they should expect to see more wolves in the state because of the wolves' tendency to migrate.

But letting it happen naturally is not only slow, it's not guaranteed to work. Many migrating wolves end up running across dangerous highways and roads and not reaching their ideal habitats.

And, given that a recent court ruling could allow wolves to be shot on sight in much of Wyoming, it is unlikely that a viable population of wolves could come to occupy Colorado through natural recolonization because the journey to get there would simply be too dangerous.

In addition, for some wolf packs, there is just simply too much distance between their current homes up north and western Colorado to make the journey.

So another way to bring wolves home to Colorado is through reintroduction into wilderness areas.

Reintroduction efforts were a success in Yellowstone National Park, and they helped restore the natural balance of the ecosystem. The U.S. Fish and Wildlife Service has helped restore wolves to other states too, including New Mexico, Arizona, Idaho, and Montana.

Unfortunately, in January 2016, the Colorado Wildlife Commission rejected a proposal to deliberately re-establish wolves in the state. This was largely because ranchers as well as some hunters and locals campaigned against it.

But conservation groups, like the Rocky Mountain Wolf Project, aren’t giving up just yet. Instead, they're working to change people’s minds about wolves.

Wolves are not ruthless killers; they actually go out of their way to avoid humans. Attacks on humans in North America are virtually unheard of, and no lethal attack by wild, healthy wolves has ever been confirmed in the lower 48 states; only one or two have been recorded in the Canadian and Alaskan wilderness.

And while wolves do hunt big game, such as elk, that doesn't mean that they are going to kill them all. In fact, they don't —healthy herds of elk and deer can be found throughout wolf country in Montana, Idaho, and Wyoming. And wolves can also help other species by keeping the number of deer and elk under control, which allows certain animals like songbirds, beavers, and bears to thrive.

People also love to see wolves in nature; after all, wolves are some pretty incredible creatures. Some travelers even go wolf-watching in Yellowstone. Wouldn't it be great if they did the same in Colorado?

We can bring wolves back to Colorado if scientists develop and implement a re-establishment plan that relies on reintroductions (like what was done in Yellowstone) and if they listen to the needs and concerns of local residents. And from there, the wolves can take care of the rest.

If you want to help the Rocky Mountain Wolf Project bring wolves back to Colorado, check out their website and sign up to find out more about ways to help.

A wolf pup. Image via iStock.

Read this post as it was originally published on UpWorthy here. 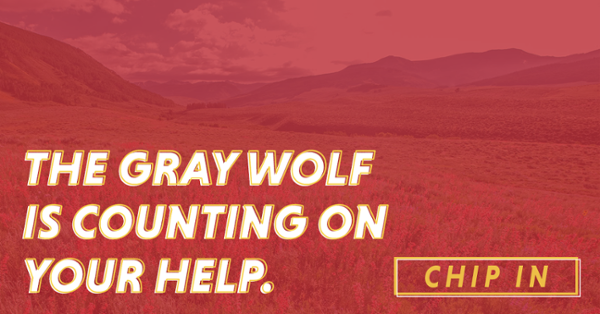